We have updated our Artificial Intelligence sector map and it is attached below. We are currently tracking over 826 companies in 13 categories across 62 countries, with a total of $2.65B in funding. To see the full list of companies, contact us using the form on www.venturescanner.com. 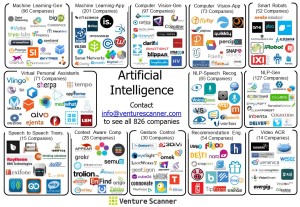 To learn more about the companies in the sector, read our Artificial Intelligence Sector Analysis at insights.venturescanner.com/2015/01/12/artificial-intelligence-sector-analysis-part-i. Some of the more recent trends we’re seeing in the sector include the following:

Big data leads to smarter artificial intelligence – In 2015 companies such as IBM and Intel are capturing big data and using them to make more accurate decisions, which leads to the generation of smarter artificial intelligence. Microsoft’s new Skype Translator not only could translate speech in real-time, but also capture the tone of speech to imitate the cadence of another language. Another computer program called Eugene Groostman has successfully beat the Turing Test and convinced others that it’s a human instead of a machine. Along the same line, artificial intelligence company DeepMind is trying to recreate the human mind and all its neurons using silicon and code.  (Source)

Robots work in closer proximity to humans – Currently the robots that work in factories are shielded from humans due to their potentially harmful nature. But experts predict that by 2016 industrial robots could safely work in manufacturing assembly lines next to human workers. Rethink Robot’s Baxter and Universal Robots are already demonstrating this possibility, and Amazon’s Robo-Stow robot arms and mobile Kiva robots are moving in that direction as well. In addition, personal robots such as Jibo and Pepper are increasingly being used in consumer households, and MIT’s Cheetah robot has developed locomotion abilities that could go anywhere a human could go. (Source)

Venture Scanner enables corporations to research, identify, and connect with the most innovative technologies and companies. We do this through a unique combination of our data, technology, and expert analysts. If you have any questions, reach out to [email protected].