As businesses worldwide realize that content marketing is becoming a more efficient and authentic means of reaching customers than traditional advertising, producing quality content becomes of utmost importance for many brands and agencies. This week I interviewed Eran Eyal, CEO of Springleap (www.springleap.com), a content crowdsourcing and marketing company based in New York.

Eyal describes Springleap as “a marketplace of 30,000 curated agency-class creatives to help brands and agencies solve creative briefs and perform market research.” Brands and agencies would set up various content and design projects on Springleap such as packaging design, mobile design, and copywriting. Springleap would then market the project in the form of a contest to its community of creatives, who would then submit their responses to the contest and promote their submissions through their social networks for a chance at winning. The brand would finally select the winners from the top-voted designs and produce them into branded products and merchandise. Springleap’s crowdsourcing of content creation enables brands to gather quality designs and creatives to receive compensation and recognition for their work. 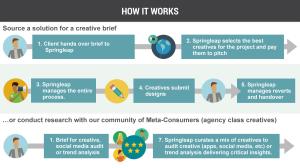 Springleap’s competitors in the content creation and crowdsourcing space include 99designs, DesignCrowd, Crew, and eYeka. According to Eyal, Springleap differentiates from its competitors because it works with a smaller select group of creatives that have ad agency experience, which allows it to deliver high-quality work rated 20%-30% better than the three leading global agencies in an independent consumer test. In addition, companies like 99designs and Designcrowd serve the SMB market and require management effort on the client’s part. Their business model is also based on speculative work in which the designers have to submit their work before receiving compensation. In contrast, Springleap focuses on medium and enterprise-level clients, provides a more managed solution, and pays creatives to pitch on higher incentives (usually 7x to 20x) than their competitors.

Springleap’s unique content crowdsourcing platform has enabled it to deliver results with some major clients. In one case study, Nokia partnered with Springleap to design a range of fan merchandise for their Windows Phones and Lumia developer community. Springleap received 70 approved designs and gave away 8 Nokia Lumia phones for fans voting on these designs, which led to Nokia trending on Twitter for 72 hours at the end. In another example, Samsung and Universal Music partnered with Springleap to design official headphones for their music streaming app The Kleek, engage their fans and grow the consumer base. Springleap received 140 approved designs from its creative community, grew their social community by 4000%, driving their active app users from 10,000 to over 800,000 users per month.

Springleap has reached some impressive milestones this year such as launching a new website, closing a sales pipeline of over $3M, and releasing a research product that allows clients to use their creatives for high-level insights and creative audit. They have also won first place at the United Nations World Summits Award in 2013 and Mentorcamp Canada in 2012. Looking forward, we expect them to continue help more brands and businesses worldwide obtain access to agency-quality creative talent for design, research and engagement.

For more insights on the companies in the marketing automation sector, subscribe to my Marketing Automation scan on Venture Scanner.