I pulled some data from our Retail Online To Offline scan comparing the total dollars raised to the number of companies in each category. You can see the breakdown below: 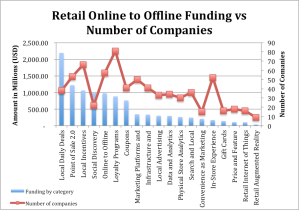 Categories that have higher funding amounts, but a relatively lower number of companies indicate larger rounds of financings that typically follow a few market leaders. Some of the categories that exhibit this include Local Daily Deals, Social Discovery, and Coupons – in line with what we’ve seen over the last few years. Vice-a-versa, categories that have low funding figures with relatively high number of companies indicate that the space is overcrowded (e.g. low barriers to entry causing a flood of similar companies), which could be disastrous for an investor or entrepreneur with no institutional memory of the space. The biggest group under this current criterion is Loyalty Programs.

To take a closer look at the categories that fall under high funding/low volume, Local Daily Deals encompass companies such as Groupon and Living Social, which grabbed the lion’s share of financing during the land grab back in 2010/2011. Interestingly, this category is also home to hundreds of clones (if not thousands), although many were localized and ultimately immaterial due to the massive financing rounds and IPO of dominant companies. We can also see the same in Social Discovery with Pinterest and Fancy raising a collective $841M. And this is also the case with Coupons, which includes companies such as RetailMeNot ($300M) and Coupons.com ($277M). Now granted some of these players are public, and while we focus on the startups, it’s still a good representation of the competitive landscape that any new startup would need to take into consideration when jumping in.

On the flip side, startups in categories that could be viewed as overcrowded may have a harder time attracting investors or significantly differentiating their product offering from others. The Loyalty Programs category is a prime example of this, there are numerous early stage companies that are approaching merchants with similar offerings but no clear market leader has emerged — we can see that only 32 of the 81 companies are funded, giving the category a 39% funding rate as compared to the inverse, which is as high as 72% (Social Discovery).

As we continue to cover more companies and more sectors, I expect this data to normalize, but it’s important for any entrepreneur or investor to always know what’s going on at any given time.

This website uses cookies to improve your experience while you navigate through the website. Out of these cookies, the cookies that are categorized as necessary are stored on your browser as they are essential for the working of basic functionalities of the website. We also use third-party cookies that help us analyze and understand how you use this website. These cookies will be stored in your browser only with your consent. You also have the option to opt-out of these cookies. But opting out of some of these cookies may have an effect on your browsing experience.
Necessary Always Enabled
Necessary cookies are absolutely essential for the website to function properly. This category only includes cookies that ensures basic functionalities and security features of the website. These cookies do not store any personal information.
Non-necessary
Any cookies that may not be particularly necessary for the website to function and is used specifically to collect user personal data via analytics, ads, other embedded contents are termed as non-necessary cookies. It is mandatory to procure user consent prior to running these cookies on your website.
SAVE & ACCEPT