I was recently at a digital currency conference, and one of the speakers brought up an interesting idea: bitcoin is more centralized than we think. As anyone who follows the bitcoin startup landscape knows, a few large players dominate bitcoin mining hashrate:

Expert game theorists are pretty confident that bitcoin is properly incentivized to prevent counterfeiting and distribute trust. But what if these large mining conglomerates maintain the trustless system in a way that also maintains high profits for themselves? In effect, they would be a semi-centralized cabal, acting to prevent their fees dropping down to market rates. If this was true, and mining operators were making great profits while trying to hold on to their competitive advantage, what are some possible signs of this that we would expect to see?

The first thing we would expect to see is an increase in mining. Once the profit potential becomes known, current players will double-down and fast-followers would enter the space. As seen in the figure below, the amount of bitcoin mining has exploded. Last year, it was common to hear that the computational power on bitcoin was equal to the top 500 supercomputers combined – now the claim is 100 times that. Clearly, the market is telling us that people believe bitcoin mining is profitable. Funding events like mining-company BitFury’s $20M round only validate this thinking.

A second signal we could see for a mining cabal would be the slowing rate at which bitcoin core protocol updates occur. The bitcoin protocol is managed by a non-profit group of developers, and each update needs to be adopted by a majority of mining rigs. If miners were trying to keep profits high, they would delay the time between protocol updates to maintain their competitive advantage. As you can see below, recent updates seem to be taking longer than the average cycle. 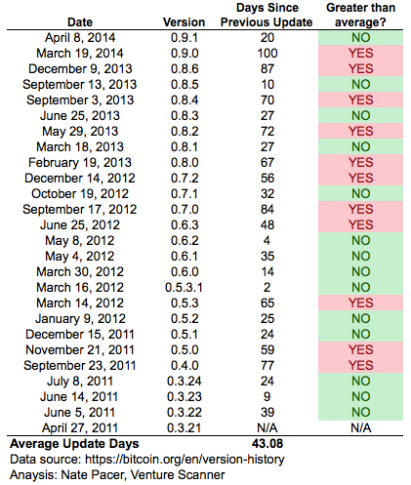 Obviously, we can’t conclude from these limited data points that bitcoin mining companies have an undue control over the update process. Perhaps the increases in update time simply reflect the increase in bitcoin participants. But, any open-source code needs a dedicated community to ensure fairness, and perhaps bitcoin enthusiasts need to look further into this area.